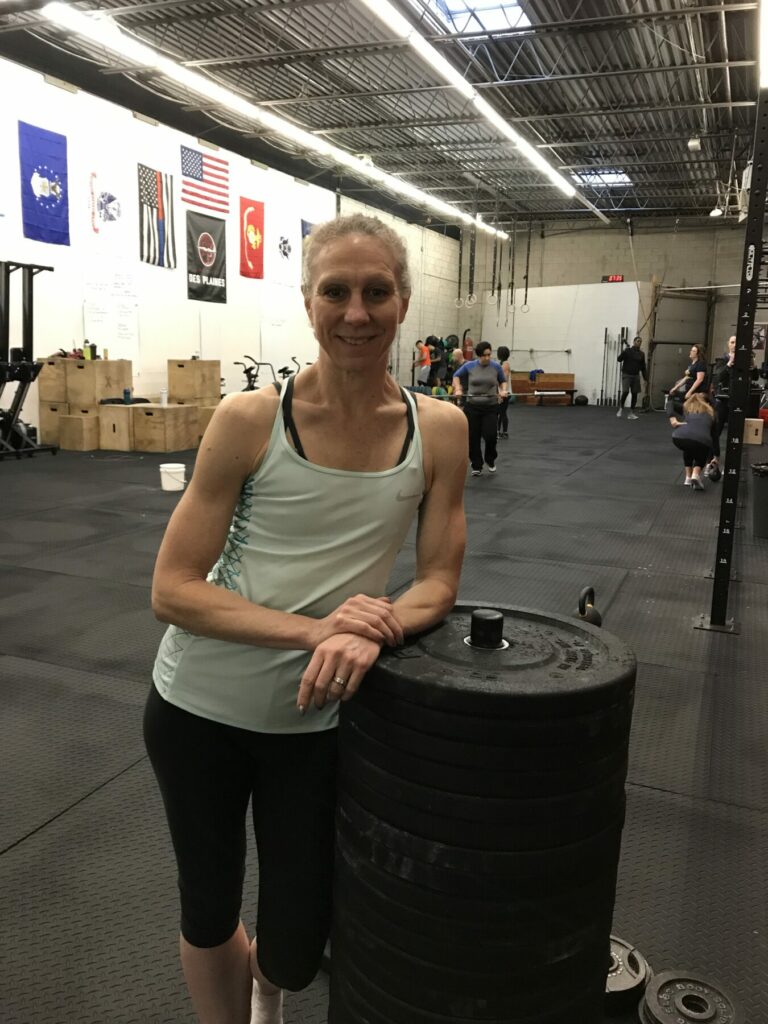 Mary’s athletic journey started with gymnastics in high school — she was bad at it, but it made her strong, which made her good at swimming.  She was fortunate to secure a spot as a sprinter on the University of Wisconsin (Madison) swim team.  Post-graduation, a busy full-time job, and two small children soon put exercise in the back seat.  But, when her youngest was in first grade, she started dragging the kids to Masters swim practices where they could sit in the stands doing homework while Mary kept an eye on them every time she breathed to that side.  For the next 14 years, Mary swam, lifted weights, and did a little running.  When her husband, Erick, suggested that they try CrossFit in 2015, her response was, “I’ve seen that on TV.  We are not doing that under any circumstances.”  Famous last words . . . .  Erick ended up talking her into it, where they discovered its inclusive, challenging, and fun nature and then rapidly abandoned all other exercise pursuits in favor of CF and its incredible community.
Mary started her career as an engineer, then pivoted into law.  After 19 years as a litigator at a large Chicago firm, she moved to Baxter Healthcare in 2015.  She decided on early retirement in 2022 to de-stress and focus on things that she truly enjoys, and coaching CF is at the top of that list.  There is magic in that moment when a coach’s suggestion clicks with an athlete, and suddenly a movement becomes better, more efficient, faster, or more powerful.
Mary and Erick live in Niles with their two dogs, Pepper (an Australian Cattle dog mix) and Kato (an Entlebucher — the smallest dog in the Swiss Mountain Dog family).  Their human children live in Fort Collins (CO), Chicago, Seattle, and Minneapolis, so are not as easy as the dogs are to dote on.